eCommerce Hosting Solutions : What to Look for When Picking One

Hosting providers are effectively the people who rent you computer resources to run your eCommerce site on reliably around the clock. This could entail you sharing a single server in a datacenter with several other websites (shared hosting), having your own virtual server running on a shared computer (VPS hosting), having a dedicated server all to yourself sitting in a big digital warehouse (dedicated hosting) or your website running on a large cluster of servers, all pooling together and sharing their resources, possibly on a national or even global scale (cloud hosting).

So now we have identified the 4 normal ways to host a website, let’s look at them individually…

This is the slowest, most inconsistently performing method for hosting a website. Not to say that it isn’t for you. Shared web hosting is normally a good start to getting your website off the ground. It’s the cheapest form of hosting, so good for startups, small businesses or people just on a budget. A shared server is just one computer, with one operating system installed and many websites running on it. In many cases, shared hosting will adequately do the job. It’s not ideal though, especially when your site starts to scale in traffic and catalog size, things might start to get sluggish.

Due to sharing the server with a (usually unknown) number of other websites, you never know how divided the server's attention is, or can become. The more websites that are squeezed onto one server, the less resources it will have to serve each individual website on it’s own. And if one or more of the websites on the server starts seeing an increase in traffic, then you can expect that to have a negative effect on the performance of your site, how unfair! This is the reasoning behind shared hosting seemingly having such erratic performance that is out of your control.

Because you are sharing your server with multiple other sites, you won’t just get handed the master key to the settings either. A lot of config and system files, along with other aspects of the site that someone might want to tinker with are off limits with shared hosting as they don’t want you breaking things for everyone. You can normally contact support to ask an admin to make advanced changes for you, but generally they won’t do it or only do it for simple things. If root access or complete control is something you desire, you might want to look at…

You know you’re getting serious when you host your eCommerce store with a dedicated server. No more sharing! The whole computer and all of its resources are yours. You can pick what operating system is installed and then log into it remotely to use it like it was a computer next to your feet, it’s screen showing on your screen, your keyboard and mouse controlling it. Of course, you can access it through other means, but that’s up to your preferences.

From here, you can install the software you want or need to host your site, having complete control of everything, from SQL servers to config files at the OS level. You are in complete control of updating your installed services (or not) as well as security and performance optimization.

If you read all that and felt the wind on your scalp (I’m bald) as it flew over your head, then I recommend giving dedicated hosting a miss for now if you can. If your current server is bursting at the seems trying to facilitate your visitors due to your massive success and you recognize the requirement of dedicated hosting to meet your stores demand then I highly recommend getting someone involved who knows what they are doing.

VPS Hosting is the middle ground between shared hosting and dedicated hosting. You are still sharing the server’s hardware resources with other websites, but you get full control of the operating system, just like with dedicated hosting.

So how is this possible? Virtualisation of course!

A computer can run multiple operating systems simultaneously. Virtualisation is like having a computer running within a computer, or several computers running on one physical computer. So with a VPS, a server will have multiple “virtual servers” installed on it, each running its own operating system. Each virtual server will be allocated a dedicated amount of hardware resources. For (a simplified) example, if a physical server is built with 64GB of RAM and has 32 virtual servers running on it, then each VPS will have 2GB of RAM allocated and always available to them, no more, no less. Hard drive space and the processor will be divided up in a similarly fair manner. This is a big contrast to shared hosting where every website on the server is battling for resources.

It’s basically like having all the control, consistency and reliability of dedicated hosting, just without all the computational grunt due to the fact that you are still sharing the hardware resources of a server as opposed to having it all to yourself.

Now if the concept of a VPS wasn’t convoluted enough for you, it’s time to go deeper, Inception style… combined with The Matix!

Ok, so if you followed along with the section about Virtual Private Hosting then you know that a virtual machine is basically a software computer than can run on a hardware computer. A prime example of this would be running an install of Windows XP within Windows 10 on your laptop to play an old game. The virtual machine settings would dictate the amount of the real computer's RAM, processor resources and hard drive the virtual Windows install would see and be able to use.

Now what if we do the opposite? Instead of having one computer running a virtual computer or several, we have several computers running one virtual machine. That’s right, so now your single virtual server actually has the ability to pool together the resources of multiple hardware servers simultaneously. For those who are wondering, yes, this is how supercomputers work!

The end result of this combination, is something that seems to blend all the advantages of the other hosting methods, minus the pitfalls. The versatility of cloud hosting is so impressive that it can host sites ranging from zero traffic blogs all the way up to Netflix, who actually use their own competitors cloud hosting services!

And it can scale on demand. If your store is plodding along, comfortably using a fraction of a single server's hardware resources to serve around a single shopper per hour, and then all of a sudden one of your new products goes viral and you need the power of 10 whole servers to keep up with crazy demand then the cloud can adapt, scale and facilitate, on the fly, no performance drop.

The pricing, services and functionality of your cloud hosted server can vary hugely depending on your budget and requirements. This is actually the biggest disadvantage with cloud hosting, it can be so complicated and varied in options that picking the right provider and package can be a right migraine. If you find yourself getting perplexed by it all, then maybe better to go with a simpler option in the meantime. On the other hand, if you can find a cloud hosting service that suits your eCommerce needs and ticks all the boxes then I recommend you go for it! 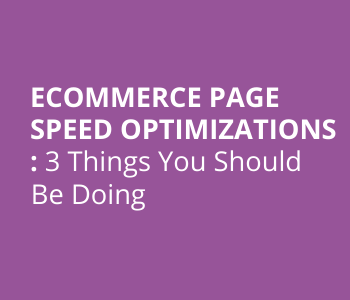 eCommerce Page Speed Optimizations - 3 Things You Should Be Doing

Page load speed is huge when it comes to climbing search rankings & increasing sales on your eCommerce store. Here’s 3 things you can do to supercharge your site.